It has become very common in the Hexagon to see people born on the French soil with West African or North African backgrounds define themselves either as Moroccan, Senegalese or whatever. I personally sometimes do it myself.  But the thing is whatever we call us, there is no doubt that having grown up in the French society and being more or less a product of the French cultural construct, I, like many others, am nothing else but culturally French. To support this argument, one just needs to see me having breakfast in the morning. What I have to start the day is not at all the traditional West African rice porridge but rather the French traditional “café au lait”; and this is what undoubtedly testifies of my being French.

Having demonstrated that whatever our backgrounds we are all, to some extent, French when having been living in France for a long time, I will now come to the point and tell you what exactly urged me to sit down in front of my laptop to write and post this article today. An incident focused all interests in the French mainstream media and web two weeks ago. The incident was however poorly -not to say, not at all- related in international and foreign media. What is known as Former French football player Willy Sagnol’s racist declaration seems, indeed, to have been quietened outside the French frontiers. My simplistic mind can only find two reasons for the incident and its silence abroad.

First of all, as explained in the introduction of this article, cultural features are just like dishes that every citizen seems to serve himself with without being aware of it. And there is no doubt that racism is one of the many components of the French culture. Willy Sagnol being a product of the French culture and society he only but could be a little bit racist. And, I appreciate Eric Cantona when he says that “white people generally tend to consider themselves more intelligent than black people; this is not exclusively in sports.” The thoughts Willy Sagnol expressed were his conclusion and analysis on African football players trying to make their career in the hexagon. “They are cheaper, more athletic but less intelligent than white North European players who have good mentalities and behaviours.” I will definitely not blame or condemn Willy Sagnol for clearly expressing his mind during this press conference on the 6th of November. His mindset and conception of Africans is not only a legacy of the French culture, but it also shows how brains and mentalities are utterly forged by the society we live in.

I will also remind you that his view point was largely and firmly defended by Hapsatou Sy; one of the rare kind of ‘black success stories’ in France. Just like the perfect domestic slave in Uncle Tom’s cabin, Hapsatou Sy, maybe too much concerned with the promotion and sales of her cosmetic products, found it necessary to support and defend Willy Sagnol -who I should rather call Willy guignol. “I am sure he is not racist; I do not believe it at all. Stop seeing racism everywhere. That black people are athletic, that is a fact”. Just like Willy Guignol who was formatted by the French society and culture Hapsatou Sy has undoubtedly, put on the perfect coat of the French woman.  Her straightened hair and willingness to remain blind in front racial injustices in France makes her the perfect sold out black slave in the Hexagon today. The fact that the system she tries to please has even managed to get rid of her declarations and support for former football player Willy Guignol on YouTube proves that she is part of the system and supported by the mass media.  Like by magic the video showing her denunciation and indignation towards those condemning Willy Sagnol’s racist comments is no longer available on the web today.

Hapsatou Sy is however not the only person to be blamed. The shame is also on these coloured journalists, commentators and public figures always eager to denounce and comment the least racist declaration when it is expressed by a white person but keep it quiet when the misdemeanour is committed by a friend, one of their acquaintances or someone they rub shoulders with. Is their friendship and personal interest more important than their duty to stand united in the fight against racism? That is a serious question.

The shy excuses Hapsatou Sy tried to express to the black community on twitter and later on TV (which were not really excuses, but rather open insults to the black activists) obviously show that the problems of racism in France are no longer a matter of white racists versus coloured people, but rather of how much coloured folks expected and supposed to stand united to fight against racism have decided to play the role of ‘the whore’ for the sake of their personal career. To make things clear, unlike what she pretends, Hapstou was not the victim of racist insults by activists; she was rather just insulted for having insulted the black activists who had expressed their outrage against Willy Guignol’s declaration in the first place.

It is very important for our assimilation into the French society and culture to have some limits lest we end up becoming like those we criticize and fight all the time. Because I felt insulted by her fake excuses I could not do otherwise than just write these few lines. So, to all these sold out black people like Hapsatou Sy and others, my message is clear: “Fair enough if you have decided to sell yourself out; but please avoid selling the community and our fight against racism for the sake of your personal interest and career. 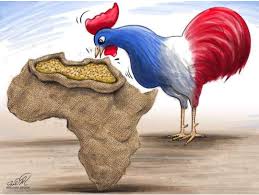 OUTSIDE THE HEXAGON: “Frightening Europe; the case of Italy”