Politics in France is quite different from what is like in the USA or in Britain. The colonial past of our country is not only dictating our relationship with our ex-colonies, it is also responsible for some of the tensions that exist between the different communities living mostly in the country. Profits and enrichment at the stake of the Africans and North Africans is without doubt the trade mark of French foreign policy, while discrimination through policies of unprecedented nationalism is what today puts aside many French citizens of African and North African descents living in the Hexagone. The absence of any genuine intellectual elite and the abundance of politicians promoting through inflammatory discourses hatred, division and stigmatisation is responsible for the atmosphere of impalpable violence that so much characterises the French society of today.

For the last 30 years or so, and as far as I can remember, politicians from both sides -left and right- have often been directly or indirectly at the origin of hate , fear, frenzy and panic in many French cities.

Electoral debates have often been focused on immigration; a

term that has evolved through the years and that specifically refers to Arabs and Muslims today. Some politicians have even contributed to the rise of the National Front with such debates and discourses. As a result they have managed to secure their time in power for more than 13 years. These tactics have also been used by the British Labour Party during their period in office. However, unlike what is the case in France, and probably due to the presence of a true intellectual elite in Britain, these germs could not find suitable conditions to grow up and prosper.

North Africans, or rather Muslims, in France are so often portrayed as a problem but never as a solution to the progress and prosperity of the country. France likes defining itself as a human rights defender, yet the treatment reserved to ethnic minorities in general shows that the notions of liberté, fraternité, égalité have never fulfilled their true meanings.

Many countries had been occupied by France for more than a century before getting their independence. Through their natural resources they made France the wealthy country

we know today. After the independences most of these countries remained linked and exploited by the Hexagon. The French organisation known as la Francophonie has since its creation in the 1960 been used as a tool to better exploit the newly independent countries. Those from the exploited countries who responding to the demand of the ex-colonial power had decided to start a new life in the Hexagon were soon to be confronted with injustice, discrimination and open racism.

There is nothing new in French politics. Nicolas Sarkozy is just a continuation of the former policies. The French conception of ethnic minorities, not to say Arabs and Muslims, is best illustrated with the case of Turkey. The French reluctance towards the entry of Turkey within the EU relies on religious divergence more than anything else. Despite a better economy than many other European countries such as Portugal, Greece, or Romania, and in spite of being member of NATO, Turkey, because of the shift of influence and balance it could create inside the EU, is still seen by French politicians in general as a nonintegratable country.

To conclude, there is no doubt that the rhetoric of hate, division and stigma has done unrepairable damage and harm to the French citizens of North African descents over the years. In theory they are French and should be protected by the Law; yet, in reality, they have been the scapegoats of most politicians. These are the reasons why for the next presidential elections I will vote for the National Front. There is no difference in my regard in the policies of these two political parties – La gauche et

la droite. I am convinced that voting for Marine le Pen will break the taboo and put the masters of rhetoric in front what they have all worked for over the years. Also, voting for the National Front may help politicians to find more positive ways of debating real issues in the future.

From then on, call me mister the French President! 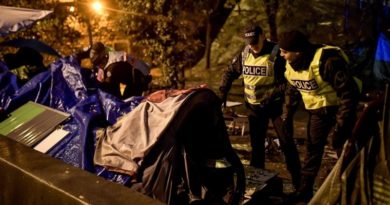