A group of French police officers is under investigation for racism after allegedly blacking their faces and posing with bananas during a “negro party”.

Photographs of the officers, posted on social network sites, appeared to show one sitting with bananas on his knees while scratching under his arms.

The images were reported to the authorities by Claudy Siar, the former ministerial delegate charged with ensuring equality of opportunity for the population of France’s overseas territories.

“Someone I know told me of the existence of these photos on the Facebook account of one of her friends,” Siar told BFM TV.

“In my presence, she called this friend and told them she was shocked. The friend was taken by surprise and tried to play down what had happened, saying that they were just having fun with friends in private and that it was a ‘negro party’.

“She immediately took down the photos but there were screen grabs that had already been taken.”

Several anti-racism organisations have officially complained about the photographs, among them the Conseil Représentatif des Associations Noires. Its president, Louis-Georges Tin, said: “If the police whose job it is to fight racism are too busy mocking blacks to defend them, it could be a good explanation as to why things aren’t improving in this area.”

He added that if the photographs were real they were a “terrible shame on the national police“.

The police’s internal complaints authority has opened an inquiry into the accusations and will interview officers based in Kremlin-Bicêtre, Paris.

Last year a policeman in the Val-d’Oise region outside Paris was found by the Copwatch website to have posted a series of xenophobic statements on social networking sites.

Another officer in Trappes, in the Yvelines department outside Paris, posted images deemed Islamophobic after he had been involved in stopping a woman in the street for wearing a veil – an incident which caused three nights of rioting in the area.

Last November, the French justice minister, Christiane Taubira, suffered racist insults including being described as a monkey on a magazine cover which showed her smiling under the headline suggesting she had her “banana back”, a play on the French term banane, signifying a broad smile.

This article was first published on http://www.theguardian.com/world/2014/jun/11/french-police-officers-investigated-over-blackface-party 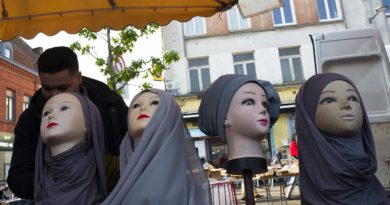 POSSIBLE EUROPEAN BAN ON THE HIJAB

The pariahs of the French universities