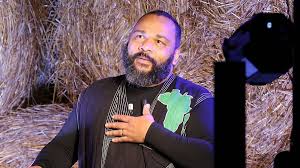 On the last weekend of the month of August as planned for long, I make my way to join an old pal from the years I spent at the Sorbonne University. The evening is warm, most holiday goers are back in the capital city. The academic year 2017-18 will be starting in less than a week. Not that I am concerned by all this, but no one can imagine how good it is to be back in the hexagon at this time of the year.
On serval occasions, in these last few years, Paris made the front page of many newspapers around the world, after some terrorist attacks killing civilians. As a real Parisian, though, on this last week of August, I decide to breach the law of fear and go out to see the best comedian ever: Mr Dieudonne M’Bala M’Bala. The Franco-Cameroonian artist has no equivalent in the English speaking world; which explains the difficulty people meet with when trying to explain his art to an English public.
“La Guerre”, in other words War, could be his last show, since after having brought the French judiciary system to its knees in 2014, the comedian confesses that he now has become a target to French authorities who would try all means to  destroy him, financially, physically, and, more importantly, as a public figure.
On this warm day of August, as always, a long queue is waiting outside; in front of the doors of the Main d’Or Theatre, in the eleventh district of Paris. Most of the people waiting are in their thirties and forties. They could be of all walks. The way they are dressed, though, tells that they are mostly anti-establish folks. As my university mate; (whose name I will not mention, lest it causes him trouble) and I wait, standing in the long queue, I eardrop and can hear some of the conversations from the other clients who have come to watch the same show: Politics, work, and above all the peerless performances of Dieudonne M’Bala M’Bala are the core of  all conversations.
When the show starts some thirty minutes later, the most contested citizen of the whole hexagon begins with a skit on religious believes. Freedom of speech involves that he is allowed to believe in whatever he wants; even if that thing looks more like the devil.
With lots of humour, irony, and using different characters, he makes the audience laugh and ponder at the same time. His first character has no respect for women in general; and his wife and daughter are the victims of his disgusting mind-set.
Dieudonne M’Bala M’Bala makes a link between silence in classical music and death that follows every war. The parallel also underlines the character’s taste for war and refined music. For this show, homosexuals and transsexual are also the first targets of the comedian. He uses irony. Progress, as he underlines it, is a sign that time has changed since the liberation of Paris in 1945. But, is that the type of freedom those who liberated the country thought of in 1945? Here is an interesting question brought by the veteran that Dieudonne M’Bala M’Bala incarnates with humour and irony. It leads the audience to laugh but also to ponder on the true meaning of the concepts of progress and freedom that the establishment tries to sell it to the masses.
Later, the character “Tourniquer” from the French  West Indies, who also happens to be a math teacher and a scientist, sees in women’s buttock the centre of gravitation of the whole world. Everything men do is for women’s buttock. Regarding the new generation, he admits that children are now sharper than what they used to be three decades ago. This exceeds his ability to teach them.
Another scene shows a baby boy victim of the consumption society who obliges his dad to surrender to the system. The whims of the child are part of the war declared by the big corporations on men and women. Promotion in marketing is seen as a hunting cession.
Macron the banker is not spared by the comedian either. Arabs, Black West Indians, Black Africans, and Jews are all mocked at, in a way that shows the audience the mindset of the racists. Men, women, babies are incarnated by the comedian and depicted in their worst features. Dieudonne M’Bala M’bala is funny, harsh and cruel, as he has always been; which makes him one of the biggest artist ever.

Bye, bye Michael; and congratulations for your art