Several years ago, when I was doing some research on bin Laden, I learned he was suffering from progressive kidney failure. Since he was obviously being selected by the American propaganda machine to be a symbol similar to that of a Tojo or Hitler during WWII, I wanted to know more about the real bin Laden, as opposed to the propaganda construct.

I soon learned that his renal problems went back to the days when he was working for the CIA in the Afghan war against the Soviet occupation. I learned via secondhand reports that the CIA had been transporting him to an American hospital in Dubai for dialysis and other medical treatments.

After the Soviets were driven out of Afghanistan, the activities of bin Laden became less open. He was involved in financing a training camp for insurgents in Afghanistan, and his hatred of American imperialism became a known feature of his ideological constructs. He especially wanted the US military out his native land of Saudi Arabia, certainly a reasonable wish. As best I can tell, he and the CIA nonetheless still maintained a close relationship because they both benefited from the relationship and appreciated each other’s roles in liberating Afghanistan.

The long history of the CIA

of being in bed with the American Mafia indicates a highly pragmatic approach in its choice of working liaisons. Since day one the CIA has always been practical about its allies. The CIA was founded with a small group of former OSS members and something like 5,000 global Nazi spies. It is perfectly believable that the CIA had found the relationship with bin Laden to be valuable and highly prized.

Bin Laden’s ongoing kidney failure was becoming a serious problem back at the time of 9/11, and he reportedly bought two dialysis machines in Dubai and moved one to his camp in Afghanistan and the other to an unknown location. His days were undoubtedly numbered at this point in time. Even though he was on a makeshift program of dialysis, his time was shrinking. A failure of one’s kidney functions is, after all, a death sentence, and dialysis only extends the victim’s life.

That, of course, is no small thing. Some patients have extended their lives as long as ten years with dialysis, and recently, in experimental trials with CoQ10, 50% of patients regained their kidney functions and were able to completely come off dialysis. (Of course, only time will tell if the change is permanent.) Bin Laden missed out on this potentially lifesaving treatment.

A person such as bin Laden, who was constantly in movement and was hauling around his own dialysis machines along with generators and fuel for the generators is a person doomed to die fairly soon. It is therefore not surprising that bin Laden died of kidney failure not long after 9/11.

You might find it interesting that bin Laden spent the last months of his life in an American hospital in Dubai. At one time, one could find posted Net testimonies by various people who had visited him in the hospital during the last months of his life. I only know of one site that has survived an apparent purging by the powers that be and is still providing the truth about bin Laden’s final days, his death, and his burial. It includes an Egyptian obituary plus leads to sundry other related articles. (I append the Egyptian obituary and the site URL.)

Keep in mind, that some officials within the CIA were quite fond of bin Laden and felt that the US owed him a great debt of gratitude for his important role in ousting the Russians from Afghanistan; so it is no grand surprise that the CIA made a real effort to make the last months and weeks of his life as comfortable as possible.

A long time ago, I sent my subscribers his obituary as it appeared in a major Egyptian newspaper. Mind you, bin Laden obituaries appeared all over the Middle East. Among the leaders of state, General Musharraf of Pakistan publicly announced bin Laden’s death, a statement that has since disappeared from the Net and which Musharraf no longer acknowledges. He now plays along with the US claim that bin Laden is hiding somewhere on the border between Afghanistan and Pakistan.

I have read three different obituaries from Arabic papers. (In each case, the Arabic versions were printed next to English translations.) These seem to have disappeared from the Net with one exception, an item I hereby enclose. The facts are simple. He was buried in a secret, unmarked grave with a simple ceremony and about three dozen supporters in attendance.

The blogosphere has been glorified as our last sanctum of truth about the war in Iraq. This is sometimes overblown. It has, for example, never vigorously disseminated the facts about bin Laden’s illness and his death way back on December 16, 2002. You’d think that by now bloggers and progressive websites would have energetically publicized the facts about bin Laden’s death c. five years ago. Instead the PNAC cabal (‘peenack’) has been allowed to endlessly milk the image of a bin Laden poised to send his minions into America with all sorts of deadly weapons.

I recently sent an email to Citizens for Legitimate Government complaining that in their otherwise excellent daily newsletters they were fortifying government lies and propaganda about bin Laden by using language that presupposes he is still alive. I received an answer that would only concede that bin Laden ‘may be dead’. CLG is still using language that presupposes a living bin Laden, and they are hardly alone in doing so.

There is one last website that offers true information about bin Laden’s death plus leads to related sites and information.

News of Bin Laden’s Death and Funeral 10 days ago

A prominent official in the Afghan Taleban movement announced yesterday the death of Osama bin Laden, the chief of al-Qa’da organization, stating that binLaden suffered serious complications in the lungs and died a natural and quiet death. The official, who asked to remain anonymous, stated to The Observer of Pakistan that he had himself attended the funeral of bin Laden and saw his face prior to burial in Tora Bora 10 days ago. He mentioned that 30 of al-Qa’da fighters attended the burial as well as members of his family and some friends from the Taleban. In the farewell ceremony to his final rest guns were fired in the air. The official stated that it is difficult to pinpoint the burial location of bin Laden because according to the Wahhabi tradition no mark is left by the grave. He stressed that it is unlikely that the American forces would ever uncover any traces of bin Laden.

Testimony of an Ethnic minority living in France 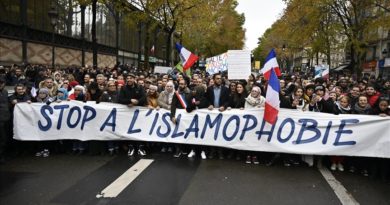